One of the most remarkable periods of human history occurred when the followers of Christ, armed with only the gospel, exploded onto the world scene. Jesus had said to them: “All authority in heaven and on earth has been given to me. Therefore go and make disciples of all nations, baptizing them in the name of the Father and of the Son and of the Holy Spirit….” (Mt. 28:18-20). Apparently, these early worshipers took Jesus’ command seriously, within their lifetime they were proclaiming Christ and making disciples all over the world.

Jesus’ final words to His disciples just before His departure were: “... you will receive power when the Holy Spirit comes upon you; and you will be my witnesses in Jerusalem, in all Judea and Samaria, and to the ends of the earth.” (Acts 1:8).  They would be empowered to accomplish the task with God’s very presence. They would need it! The church would start in Jerusalem, which it did at Pentecost, but quickly move out into new regions of the world, which it also did. A movement was launched that changed  the world. Two thousand years later, we are part of that same movement.

In the US Campus Ministry, we define a movement as the collective activity of committed, multiplying disciples as they band together and trust God for an impact greater than their own individual ministries. Movements foster camaraderie, momentum, enthusiasm and faith. They are synergistic in that the impact of the whole is far greater than the sum of the individual parts. People sense God’s involvement as they prayerfully pursue His leading and direction and then go after it together.

In order for the whole world to be reached, we will need movements of God everywhere. “Movements everywhere” means to the ends of the earth, all nations and people groups, in the US and abroad. The vision is much bigger than any one of us, but it begins with just one movement.

Every leader of a missional team needs to personalize the “everywhere” within their own context and leadership. We want to “grow where we are, and go where we are not.”  This simple phrase expresses a commitment to growing healthy, existing movements, while launching new movements in places where the gospel needs to be proclaimed. In the world of students and faculty we too have identified a way of thinking about it similar to the “Jerusalem, all Judea, Samaria, and the remotest part of the world” perspective Jesus provided in Acts 1:8. We call them The Four Aims:

The Four Aims are not sequential. We don’t need to finish one before we move on to the next.  Leaders and their team could move into all four aims the first year even in a brand new location if they were so inclined and had the resources. This is why empowering students, faculty and volunteers is so crucial to success. We won’t get there without them.

Building a movement whose purpose is to embrace more than one audience, more than one campus, more than one ethnicity, in more than one nation helps everyone to engage in the full scope of the Great Commission. The resulting effects are significant: 1) We are obedient to what Jesus has called us to do; 2) More people are transformed by the gospel; 3) Our faith is stretched and grows as we see God work in our midst beyond what we could ever do ourselves. This is what true movements do. They change things outside of themselves because of their cause, and they change those involved within them as together, in the power of the Spirit, they trust God for something significant.

A Four Aims movement has from its very inception the four audiences listed above in its purview. For example, a new embryonic Destino movement would have an eye toward launching still more movements within any of the 4 audiences.  It is our way of engaging the Great Commission.  In the DNA of a true movement there is a moving outward, looking for new places where the gospel needs to be proclaimed on an ongoing basis. From the first year every team should explore initiating ministry in one or more of the 4 audiences to see what the Lord might do.

The Four Aims contains an important perspective for MTLs. You are not just leading a team to build a movement. Rather, you and your team raise Christ-like leaders who will lead teams who in turn launch new movements in ethnic contexts, new campuses and across the globe.

Movement leaders must clearly understand their unique role related to movement building and moving out into the Four Aims. Your success is best measured in terms of the effectiveness of those whom you lead. Consequently, you will focus on different things including: 1) ensuring that engaged disciples have the skills necessary to effectively share their faith, follow-up new believers, build disciples and mobilize them into the mission; 2) leading the team into the fulfillment of the Four Aims. That includes raising up new movement leaders, disciples who are able to pioneer new contexts and launch new movements (see below); 3) acquiring the resources necessary to fulfill the vision; 4) clarify direction and casting the vision; 5) coaching & motivating; 6) formulating strategy; 7) empowering others in order to grow the leadership base.

In summary, those whom you lead are laboring within the movement while you, as the movement leader, are working on the movement, ensuring the growth and progress of the whole. It is helpful for leaders to remember that people are doing the best they can with what they’ve got, the key question is: “what do they need to get better?”  That is your job and privilege, seeing others succeed in what God has called them to do. If they win, you win.

Finally, since the Four Aims have so much to do with launching new movements in new places, a brief word is in order on how we go about doing that. Think of the conception, birth, growth and development of a movement in four stages:

Putting It All Together

Every movement leader will have an initial context like a campus, a high school, or an ethnic audience on a campus. In each case the focus will be students and faculty. But, in view of our call to go to the whole world, movement leaders will always be striving toward launching movements in one or more of the remaining three aims. While a Destino movement leader is growing that movement, they will move toward another context like a campus, an international location or an ethnic context. Then they pioneer that new location seeking for and developing key leaders and helping them to launch and build a multiplying movement. Just as spiritual multiplication reproduces disciples so movement multiplication reproduces more movements in new places.

When it comes to moving out into the Four Aims, one size does not fit all. While each leader needs to move forward with confident faith, the development of the movement(s), the size and experience of the leadership base and other capacity issues need to be considered as new ground is taken. That being said, our hope is that even from the first year a missional team would pray and consider the next step  toward one of Four Aims to see what the Lord might do. As you consider this, be sure to seek the advice of your Regional Leadership and or National Ministries. 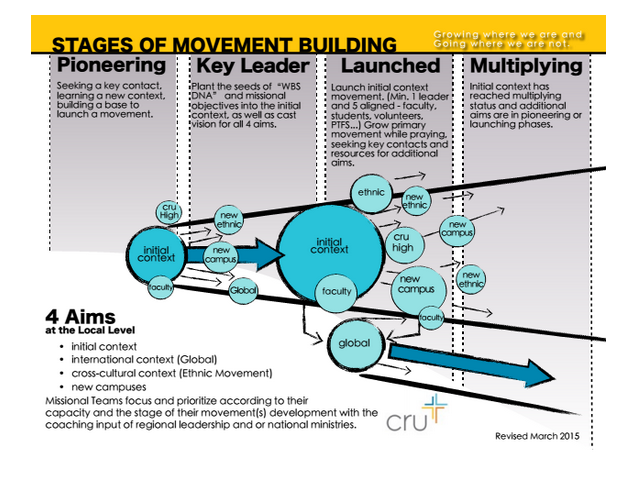 The First Two Weeks on Campus